On July 28, 2020, Rev. Shaun Fryday (chair of Justice and Community Leadership and minister at Beaconsfield United Church) and David-Roger Gagnon (Regional Council staff member responsible for Networks and Clusters) made a pilgrimage to the memorial monument dedicated to Le Grand Dérangement de l’Acadie at Parc des Cultures in Saint-Jacques, Quebec.

In this blog post, David-Roger shares some reflections about the history and involvement of the United Church of Canada in the development of opportunities and resources for commemoration and reconciliation around this tragic event in Canadian history… 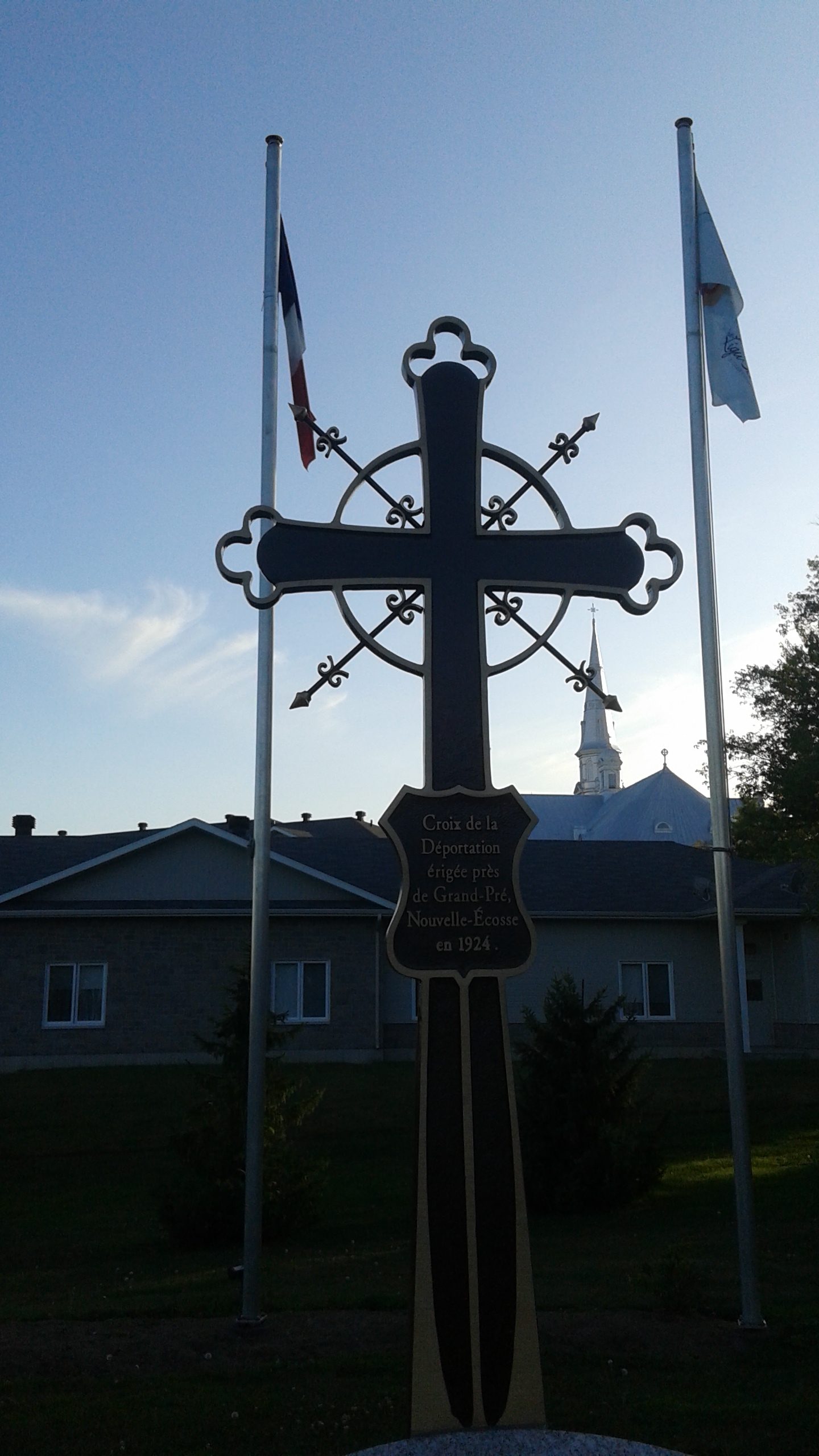 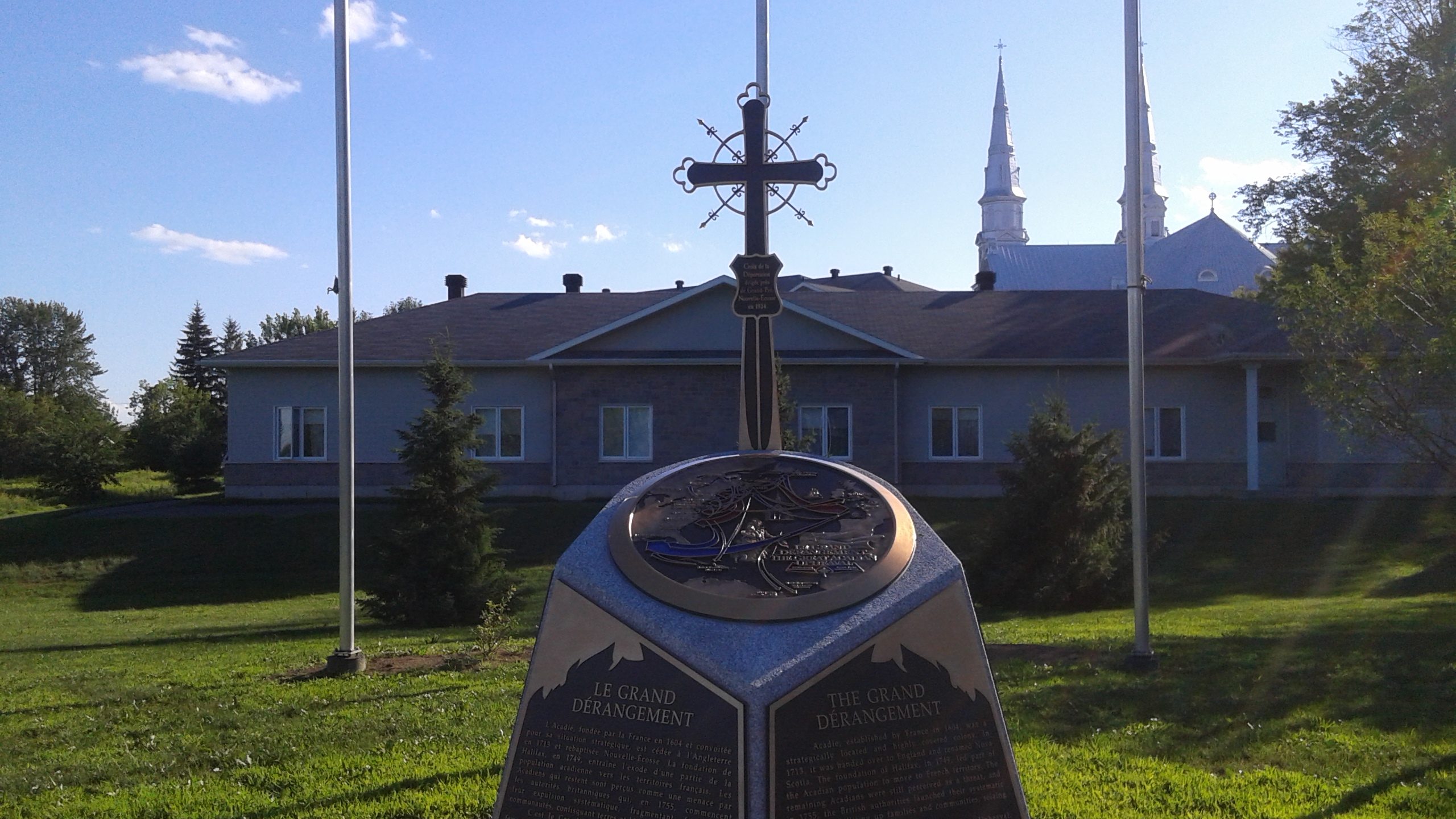 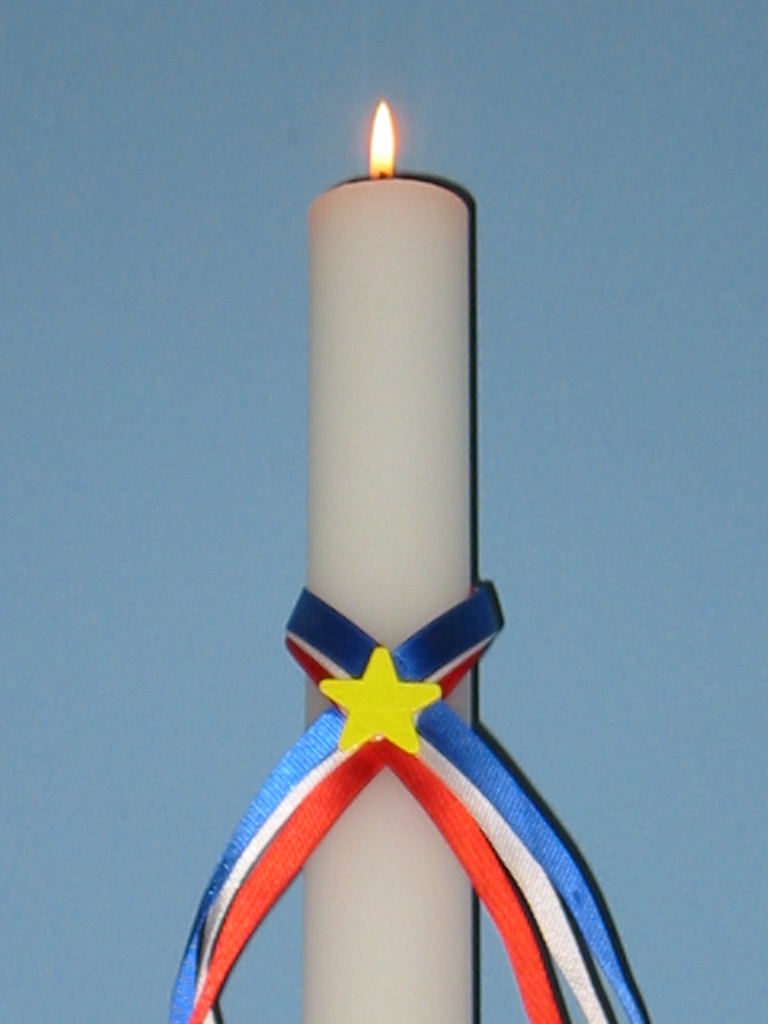 Since 2005, Canada takes a moment to stop and reflect each 28 July on the tragedy in Canadian History called le Grand Dérangement de l’Acadie, or the Acadian Deportation. While it may seem a concern that is somewhat distant from the United Church of Canada, the United Church actually played a key role in establishing a dialogue process that led to annual commemoration ceremonies to mark the event.

Starting in 2004, on the 400th anniversary of the establishment of Acadie, a partnership between Members of Covenantor Church in Grand Pré, the former Maritime Conference, and the former Unité des ministères en français (Unit for Ministries in French), initiated a dialogue process in the Maritimes that included Mi’kmaq, Maliceet, Passamaquoddy, Métis, Acadian and English-speaking communities. This dialogue, in the spirit of reconciliation and Right Relationship, paved the way for annual commemorative ceremonies, initially in Grand Pré, and eventually across the Atlantic Provinces, to mark the Day of Remembrance. The first year of the commemorations, the Mi’kmaq community led us in traditional ceremonies to mark the connection between the First Nations and Métis and the Acadians in their early journey together. The United Church of Christ (USA) sent a delegation from Louisiana, and several elected officials, and many other churches took part. People across Canada, the US, and even in Europe light candles of commemoration, as a Light of Hope & Healing to mark the day. The goal of the process was to remember the history in order to better build right-relationships today. In subsequent years, the then Lieutenant Governor of Nova-Scotia, Mayanne Francis, attended the events, as did the Jewish Association of the Atlantic, and the Black Communities Associations of Nova Scotia, among many other groups who represent peoples that know the experience of displacement and ethnic cleansing. And the United Church created a resource, called “Light of Hope & Healing”, to help sensitize and explain the importance of this remembrance, and the dialogue process towards reconciliation and right relationship.

For those who are less familiar with this part of Canadian history, on 28 July, 1755, Nova Scotia Governor Charles Lawrence signed the order to deport every man, woman and child in the Acadian communities and to destroy all the buildings and confiscate all portable property and livestock. He knew that his own troops would not do this, as they knew the Acadians as neighbours, so he enlisted the help of Massachusetts Governor William Shirley to send troops from Western Massachusetts to enact the ethnic cleansing. Of the known 12 000 Acadians on record (and some estimate another 1 000 + who were not on record) all but 150 were deported, with family members sent on different ships to different places, many never to see their loved ones again. Approximately 4 000 died in transit from disease or at sea. Several hundred were sold into slavery in the Carolinas, and many were deported to New England and the Southern Colonies, to Europe, the Caribbean. Some populations were deported several times as the scourge of ethnic cleansing crossed its way through the Atlantic region between 1755 and 1760. British mercenaries were sent to hunt down and kill any Acadians who were being hidden and protected by their First Nations friends, and many First Nations communities paid a very heavy price of punishment or death for harbouring Acadians. The 150 Acadians remaining in Acadie were imprisoned and used as forced labourers to maintain and repair the diking system that the Acadians build, which rendered parts of Acadie among the most fertile farmland in Eastern North America. And le Grand Dérangement brought an end to one of the longest-standing peace treaties among First Nations and Europeans, having lasted over 150 years, between the Mi’kmaq and the Acadians.

While this history connects with the United Church by way of the fact that some of our churches today stand on lands where Acadians once lived in the Atlantic context, there is also a direct connection to this story for the Conseil régional Nakonha:ka Regional Council. Several hundred deported families ended up resettling in Québec, which was still part of New France at the time. It is estimated that close to 1/3 of Québécois have Acadian roots from this influx of Acadians to the population of Québec. In addition, some deported families ended their journey in the Lanaudière region, where they began rebuilding a Nouvelle-Acadie. The communities of Saint-Jacques, Sainte-Marie-Salomé, Saint-Liguori et Saint-Alexis form what is still called to this day Nouvelle-Acadie. So, there is a part of Acadie right in the heart of the Conseil régional Nakonha:ka Regional Council, and the residents of these four communities form the highest concentration of Acadian descendance in all of Québec. They mark the Acadian “national” day (15 August) each year with a Festival de la Nouvelle-Acadie, and we had hoped to begin the tradition of ceremonies there to mark the 28th of July this year, but COVID-19 required us to move those plans to next year.

This lesser-known part of Canadian history teaches us that the effects and consequences of ethnic cleansing are long-lasting, far-reaching, and profoundly destructive. The scars of le Grand Dérangement can still be seen in the marginalization of Acadian populations in several parts of Canada. But the story of le Grand Dérangement is also a story of profound resilience and perseverance. From the nearly 10 000 Acadians who survived le Grand Dérangement, there has grown a descendance of an estimated 3 million who can proudly claim their Acadian Roots. And to quote Antonine Maillet through her story of Pélagie, “Ou’s que je suis, c’est l’Acadie!” (Where ever I am, Acadie is there).

If you are interested in learning more about this lesser known part of our history, you can contact Les Ministères en français for the Light of Hope & Healing resource. You can also visit the memorial cairn and memorial park in the village of Saint-Jacques, which is just behind the large church in the heart of the village. This beautiful site pays homage to the tragedy of le Grand Dérangement, and celebrates the resilience of the families that build their Nouvelle-Acadie just a short way down the road. And maybe you might like to light a candle on 28 July each year to join in remembrance and in solidarity with the Acadians, and as a sign of Hope and Healing.