42nd Christian Commemoration of the Shoah 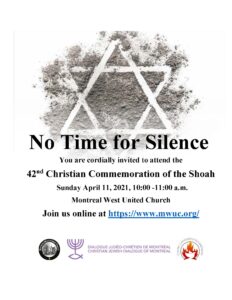 Montreal, March 29, 2021. The Christian Jewish Dialogue of Montreal (CJDM) will hold its 42nd annual Christian Commemoration of the Shoah online on Sunday, April 11, 2021 at 10:00. The host Congregation this year is Montreal West United Church. The service will be available at https://www.mwuc.org/.

This event will bring together Jews, Christians, and others to commemorate the six million Jews and one million other victims of the Holocaust, also known as the Shoah (“the annihilation” in Hebrew), during World War II.

Presided by Rev. Rosemary Lambie (Executive Minister, Conseil régional Nakonha:ka Regional Council), the commemoration will include an intergenerational interview with Holocaust survivor Eva Kuper by a member of the MWUC youth group. A candle lighting ceremony will be led by Rev. Mark Hammond and Rabbi Sherril Gilbert in remembrance of all the victims of the Shoah. Songs and music will be performed by singers Fran Avni, Evan Burman, the MWUC Choir, and organist Owen Spicer. A message will be delivered by Hon. Irwin Cotler, Canada’s Special Envoy on Preserving Holocaust Remembrance and Combatting Antisemitism. Online fellowship will follow. All are welcome.

Yom Hashoah (“the Day of the Shoah”) was established in 1951 by the Knesset, the Parliament of Israel. In Montreal, the first Christian Commemoration of the Shoah took place at Christ Church Cathedral in 1979. Since then, different Christian churches have engaged with members of the Jewish community in a shared act of remembrance on the Sunday closest to Yom Hashoah. In 1999, the National Assembly officially recognized the observance of Yom Hashoah and invited Quebec citizens to share in the memories and mourning of the Jewish community and to ponder the lessons learned from the Shoah.

Founded in 1971, the Christian-Jewish Dialogue of Montreal is composed of representatives of various sponsoring organizations, who come together on a regular basis in order to build and strengthen mutual understanding and support between Christian and Jewish communities.

Sermon No Time for Silence 2021