Colours in all their Complexity: Anti-Racist Reading for Families

I want to begin here today with a caveat; while I think many contemporary issues young families face can be tackled with a beautiful children’s book in hand, I am wary of education as being the singular approach that many white people take to combatting racism. We all have to go beyond the book clubs and act bravely to move our society to a new place. Simply talking and learning are not enough. I do believe in education, and I believe that anti-racist education, which moves beyond colour-blindness and simply celebrating diversity to truly naming and facing the struggles and inequalities in our world, is key. I believe that starting conversations with children about racism is critical and something we need to do with kids of all races, not only with the children who are forced to face it because of the colour of their skin. As a privileged white mother and youth worker, I have a choice to discuss racism and discrimination with the youth in my life. I have the choice to shield them from the bad news. Black, Indigenous and other racialized peoples do not have that choice. Non-white families are faced with having necessary and self-preserving discussions with their kids and that burden should not be placed on them alone. My social media pages are saturated with Black Lives Matter posts and police brutality remains in the news headlines almost daily; conversations about race, equality and educating children seem urgent and necessary.  Despite the prevailing beliefs of our provincial government, systemic racism is alive and well in Quebec and Canada. Unconscious bias exists and white privilege is real. So, knowing that reading books together is only one step on the journey, I will share with you two beautiful children’s books which could be tools for your home, classroom or church to begin a conversation. 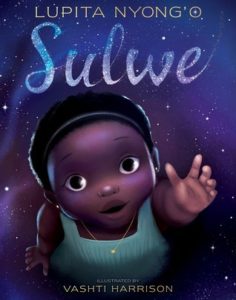 The first book is called Sulwe, written by Kenyan actress-turned-author Lupita Nyong’o and illustrated by Vashti Harrison. This book tells the story of a young girl named Sulwe whose skin is the colour of midnight, while the rest of her family has skin comparable to sunshine and dawn and other bright things. She faces teasing and discrimination from other children and feels jealous of the lighter and brighter shades of skin she sees around her. After trying and failing to change her own skin colour, Sulwe goes on a journey of self-acceptance aided by her loving mother.  Through a beautiful nested fable about the sisters Day and Night, Sulwe comes to realize that without the darkness in the sky, we cannot see the brightness of the stars and that her brightness and light doesn’t come from her skin colour, but from within.  Vashti Harrison’s illustrations make this book come alive with a style drawn from her film and animation background. This book is fascinating and heart-breaking to read as a white person, because it shows how pervasive and damaging anti-black racism can be, that colourism exists within a community of people who all identify as black. Colourism is prejudice or discrimination against individuals with a dark skin tone, typically among people of the same ethnic or racial group. When reading this book with children who are not Black, I see many opportunities to talk about our ideas of beauty and treating people with respect. It is especially good for young children who might be noticing differences and observing them in a way that can be challenging in public. It is important not to shame or dismiss the differences kids observe in people, but to encourage open discussion in an affirming way. When we shut down conversation about Blackness or race, we associate talking about darker skin with shame, as though it really is a bad thing to be Black. That is not what I want to imply to my kids as I teach them about the world. 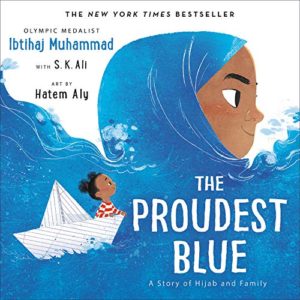 The second book I recommend reading is called The Proudest Blue.  Ibtihaj Muhammad; the first Muslim-American woman to compete for the United States in the Olympics while wearing a hijab, wrote this lovely book. Based on her own experiences as a young girl, Muhammad shares the story of Faizah, and her older sister Asiya’s first day of wearing the hijab. With her new backpack and light-up shoes, Faizah knows the first day of school is going to be special. She is proud of her sister’s beautiful blue headscarf, the same colour as the ocean meeting the sky. When she witnesses the different reactions to the hijab–shyness, curiosity, teasing words and threats–Faizah has to be brave and embrace the strength and pride she feels for her culture and her sister’s milestone. This book feels like a must-read for families in Quebec, where we have such a strange and disconcerting relationship with hijab-wearing people. In this book, wearing a hijab is seen as a rite of passage, a symbol of strength and identity and as a beautiful and friendly part of the life of Muslim women. Representation matters. This book shows a protagonist who doesn’t look like my children, but with whom they can still connect and relate.  This book shows a female Muslim role-model. That is valuable. For a young Muslim girl this book might offer an opportunity to be the hero, the protagonist, and to see her own experiences validated in a beautiful and colourful book.

Reading diverse books with children is an important step on the journey of anti-racist education, parenting, and children’s ministry. We live in a time of great change and injustice, and I think it is important for parents to use every tool in their toolbox. Staying silent about racism is a tempting but dangerous choice; take steps to have these conversations with your kids, so we are all better equipped to combat the inequality in our world.

Note: Unfortunately, French translations of these two books are not yet available. However, in the same vein, I recommend the book Nos boucles naturelles, translation of “Hair Love” by Matthew A. Cherry, illustrated by Vashti Harrison, as well as the book Toi by Peter H. Reynolds: “Be crazy, original, surprising, unique, strange and colourful. Accept being different. Just be you. “